If you follow Living a Doll's Life or American Girl on Facebook then you have already seen this story. However, it is just too sweet not to re-post and share over and over.

(He deserves a medal and so do all his friends who are helping.) 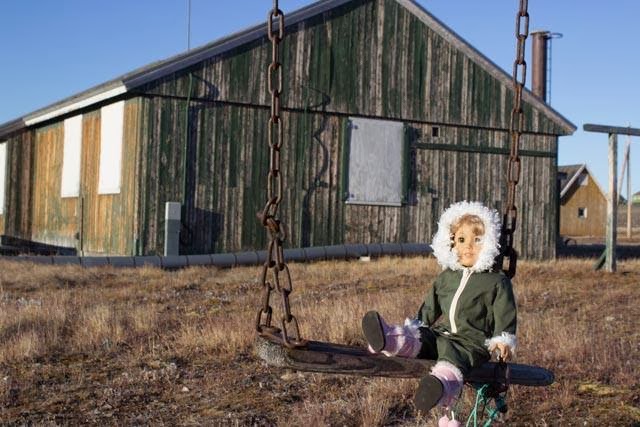 I'm an active duty Air Force father and I have a story I would like to share. My seven year old daughter, Emaline Grace, has three American Girl Dolls and while I was packing my things for my remote tour here in , , she brought one of her dolls in and sat on my bed while I loaded uniforms and cold weather gear into my duffel bag.

She took my hand and said since she couldn't come to with me that she wanted me to take her doll with me. She explained if she couldn't see all of the things Daddy was going to see and she couldn't come spend time with me then at least her doll could. Choking back tears I agreed and promised to send pictures of her doll everywhere I went. That night Emaline and I got online and ordered a winter outfit for her so that her doll would stay warm.

A few days later I kissed her and her brother goodbye and boarded an airplane bound for where I would catch a military rotator to . I snapped my first photo of her doll at the airport in where I departed, and then again in for my layover, and again in . I took photos all along the way to Thule Air Base, 950 miles north of the .

So far her doll has travelled across the country and beyond. She has seen abandoned Nike Missile silos, stood inside Cold War bunkers, and planted her feet on the Polar Ice Cap. She's been aboard Danish Search and Rescue ships, aboard ocean liners, dipped her toes in the flowing water of a glacial stream and rode an ATV to the coast to see Musk Oxen herds grazing.

She sat in the truck when we saw the polar bear, stood on the shoreline when we watched a pod of seals in the bay, rode a helicopter to native villages on the outreaches of the ice and explored a cavernous ice cave. She has been a trooper the entire way, riding shotgun in my hiking pack braving the environment just like I have. We did have to have a custom made parka made for her as Emaline wanted her doll to match Daddy!

I have taken pictures of most of these moments and most of my military friends isolated up here with me have commented or remarked on the doll or reminded me sternly to remember to bring her when we've made plans to go out. I email the pictures to Emaline and we get a chance to talk about where her doll has been and what she has seen.

It has helped bridge the gap that is sometimes difficult to fathom when you leave your children behind. Having this bond has brightened an otherwise bleak tour for me and has helped me (probably more than my daughter) weather this difficult time.

I've attached one of the pictures that seems to embody the adventure (it would only allow me to upload one).

Isn't that awesome?! I love it.

Ps. I apologize, I don't know how to get the highlighting off the story text.
Posted by Xyra Silverleaf at 11:22 AM