Today's installment focuses on 18th and 19th century kitchens and foods I HAVE to eat every year because I only get them at Festival.

Melody, let's take a look at this 18th century kitchen. 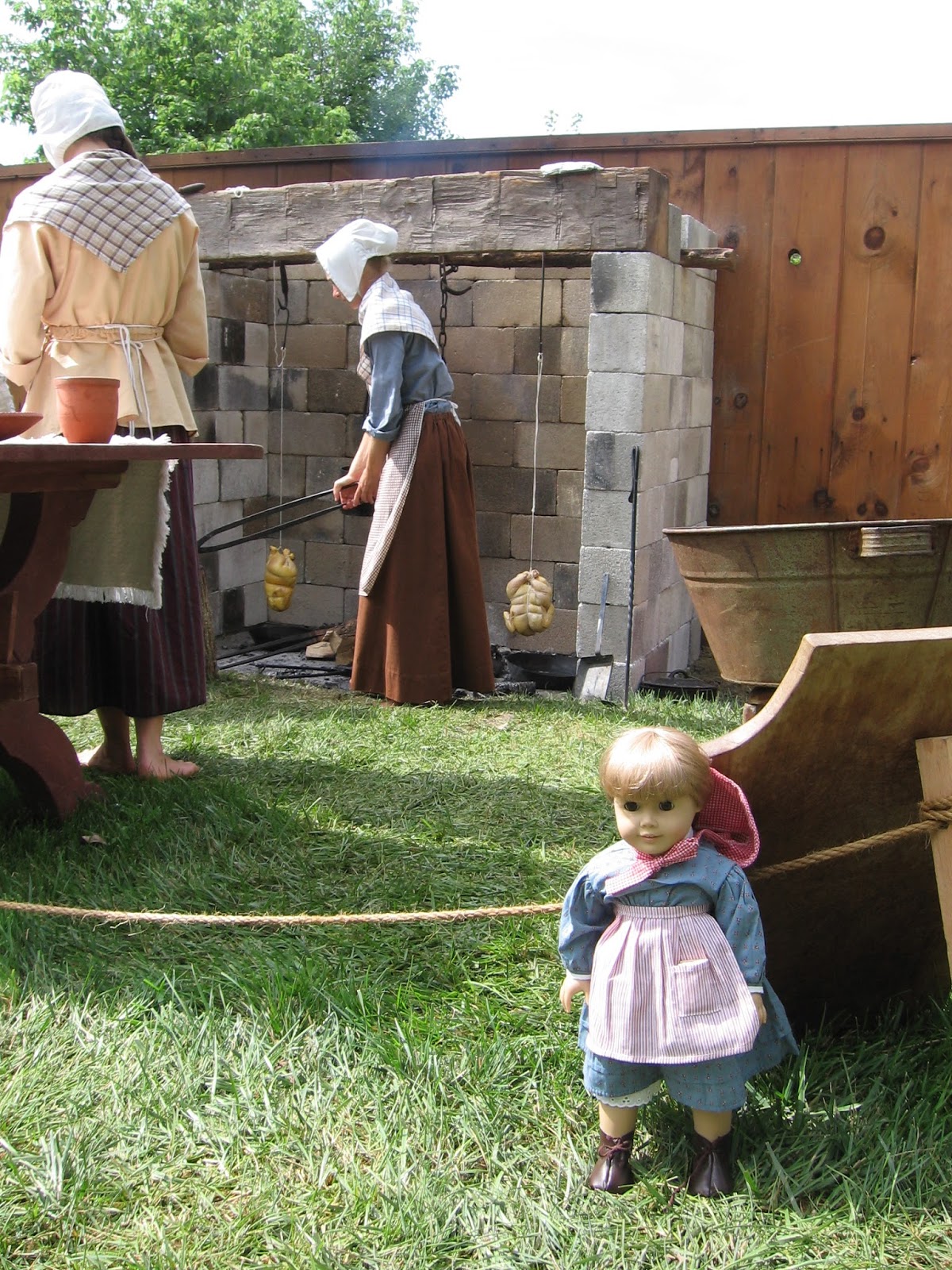 Where's the stove?
They didn't have stoves back then. The women cooked using a tripod over an open fire or in a hearth stove.
The fritter ladies use the tripod method, right?

[Note: we did not stop for a picture at fritters this year.]
Yes, and many others.
What are they making here?
Chicken and waffles.
Huh? Who eats chicken with waffles?
The Pennsylvania German do. It's quite good. She's holding the waffle iron.
Wait. That's a waffle iron?
Yes. She has to hold it at the right spot over the hot coals and turn it so that one side does not burn.
That's a lot of work.
You bet. See the chickens hanging in the hearth stove? 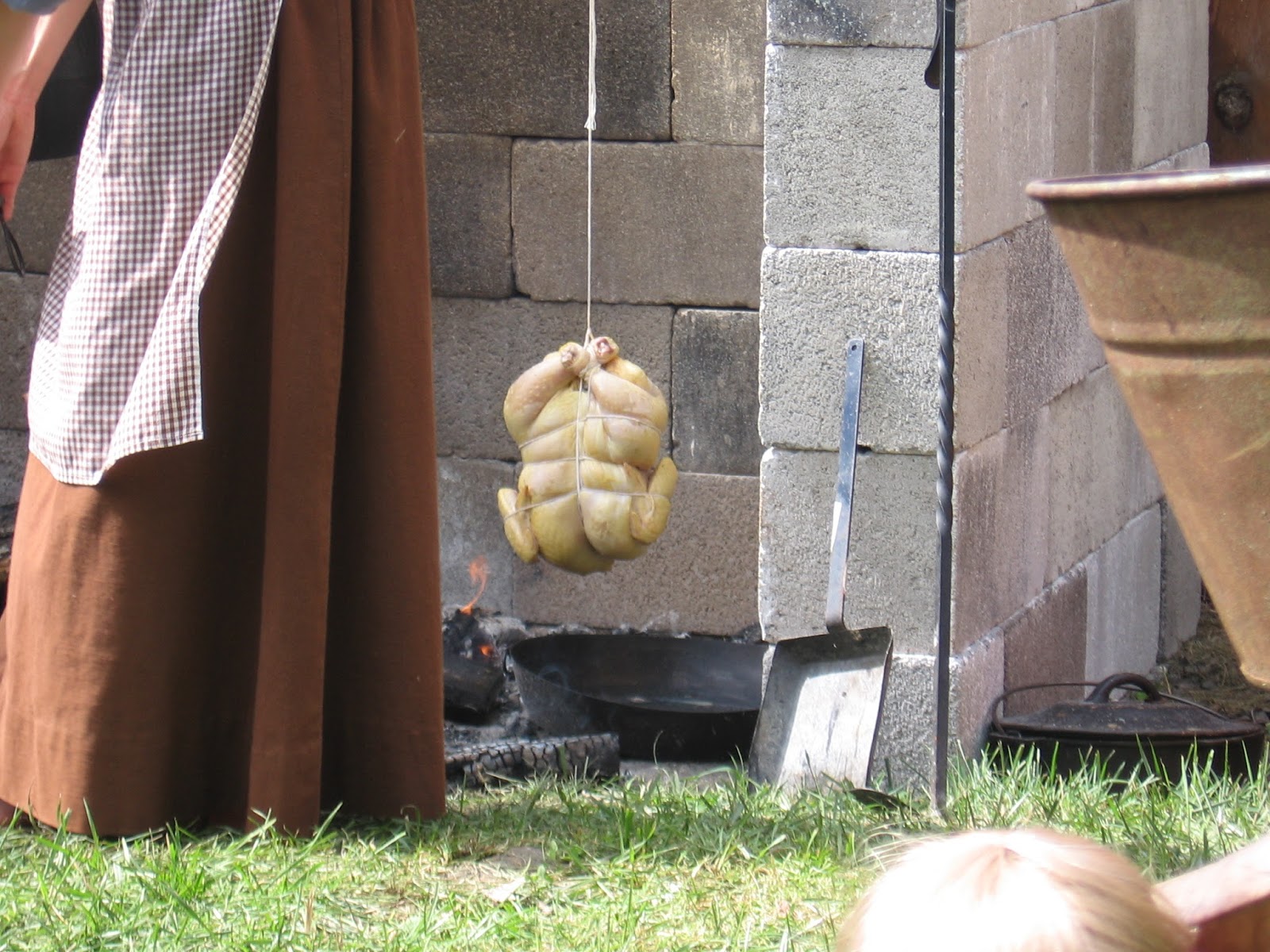 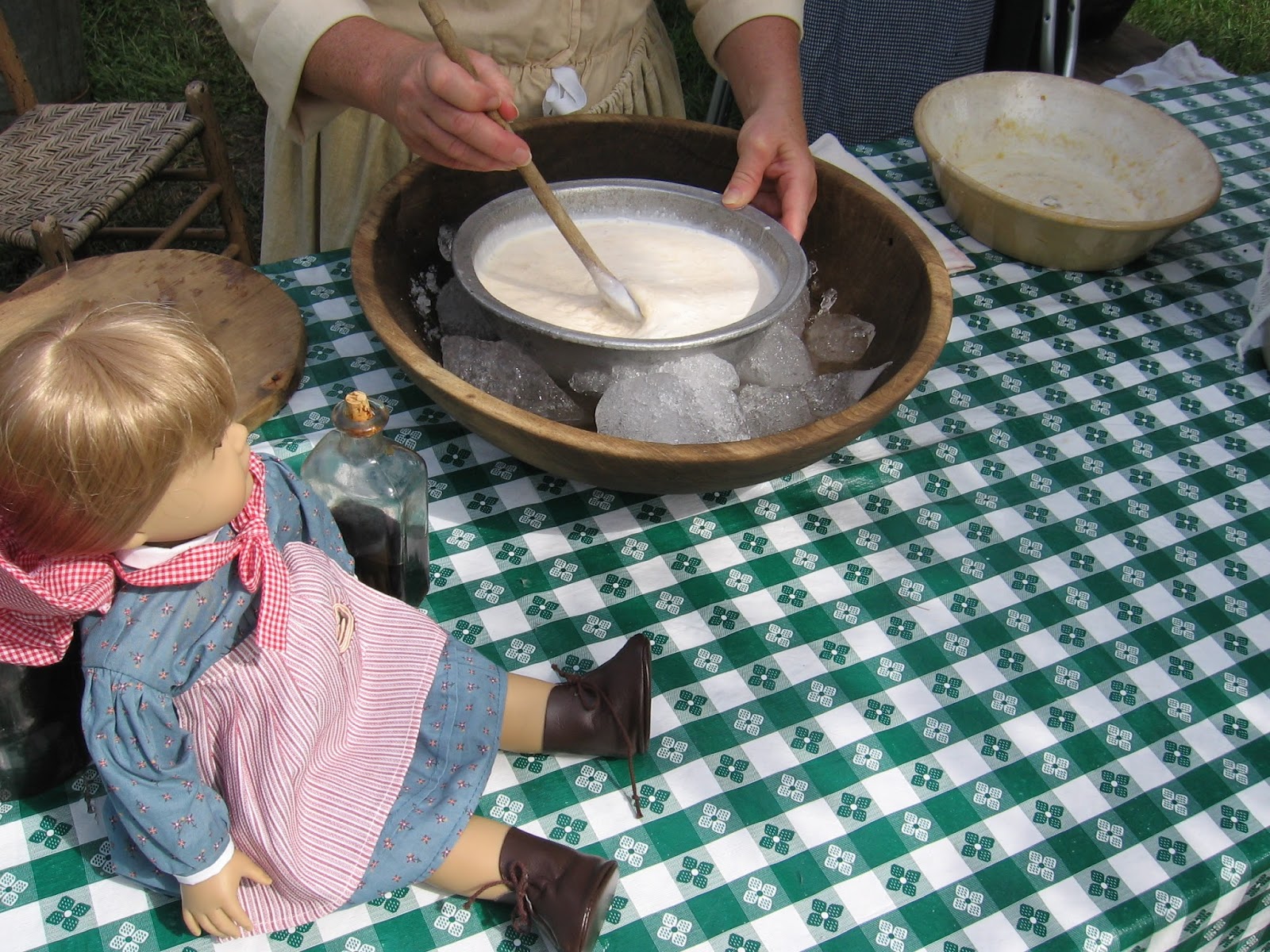 They get all the ingredients together in a pewter bowl. That bowl gets placed in a large wooden bowl filled with ice and some rock salt. Then She puts a wooden lid on the pewter dish and spins the dish until the mixture starts to freeze. She has to scrape down the sides frequently.
Yikes! Nothing was easy, was it?
Everything was worth the effort put into it.

What's with the newspaper? 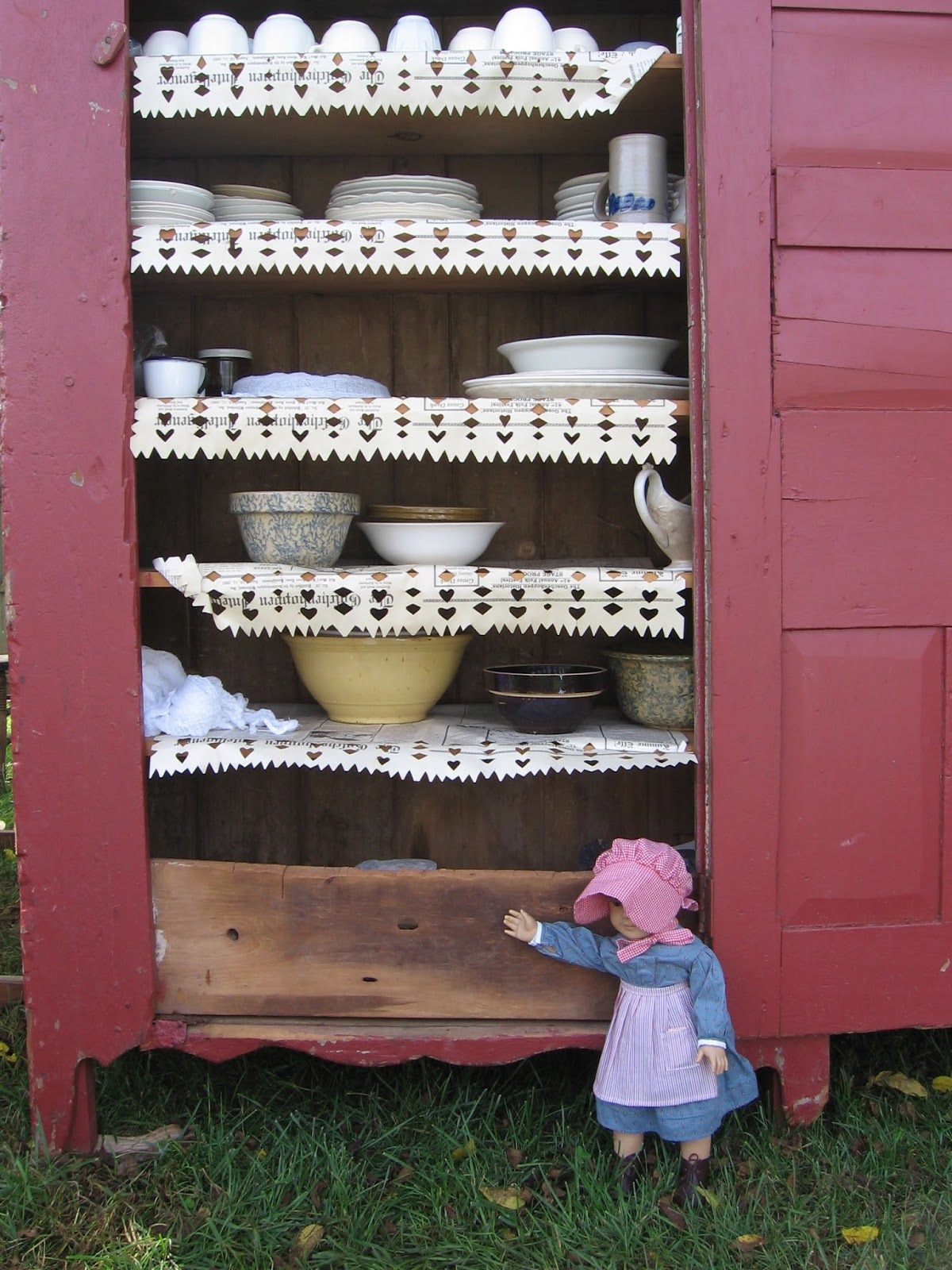 The Pennsylvania Germans liked to use up everything. So when they were done reading the newspaper, they would cut designs in it and use it for shelf paper "just for nice."
Pretty!

What is this?
Ohhhh, (smiling widely) that is potato candy*. 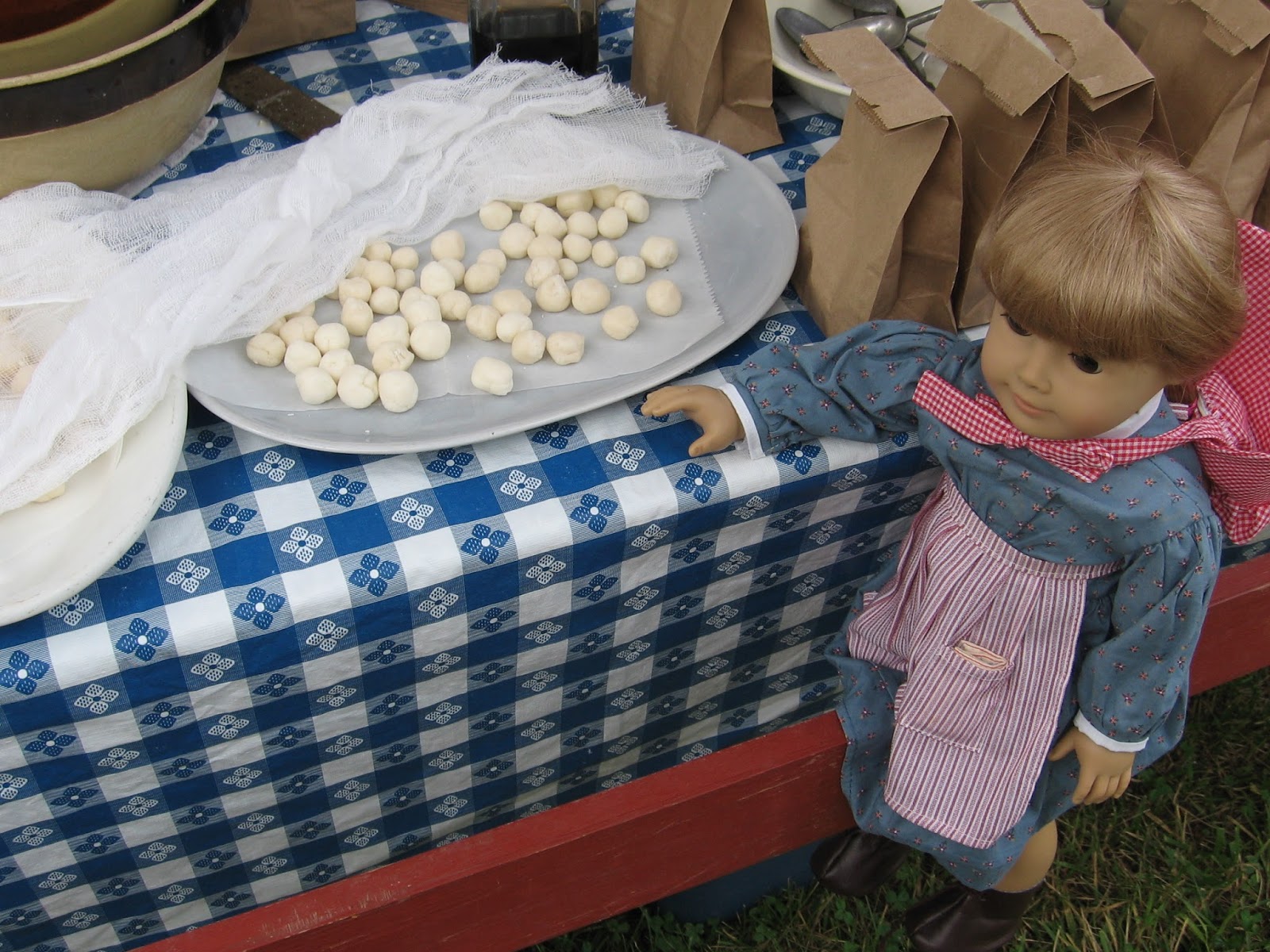 Seriously?
(nods with mischief in eyes) Go ahead, try a piece.
Wow! Super yummy! Can we buy a bag.
Of course!

What is she doing? 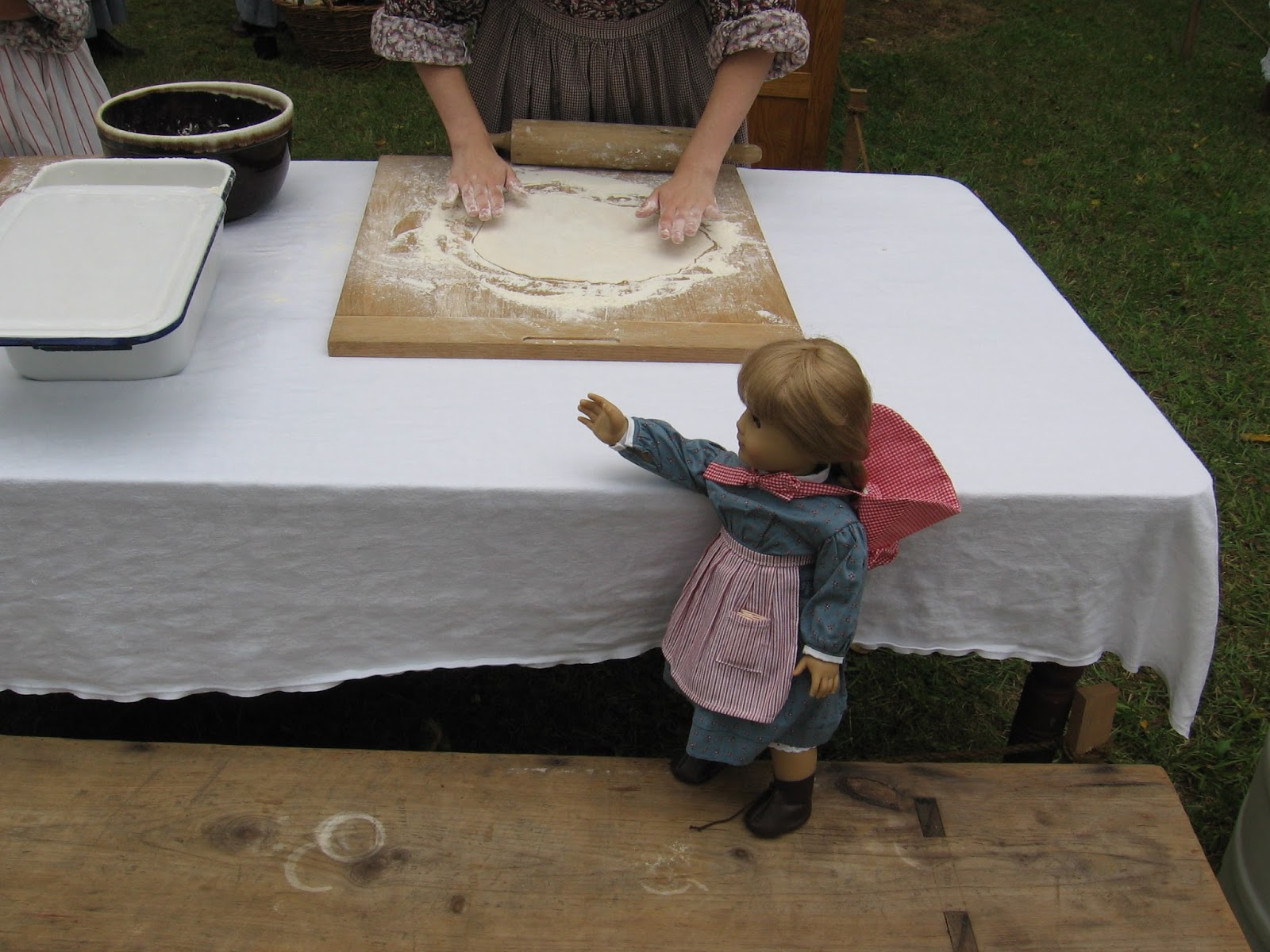 She is rolling out pot pie noodles.
I thought pot pie had a crust.
(sighs) It's really called "bot boi" in Pennsylvania German. That is where the confusion comes in. It sounds similar. Anyway, here our pot pie* is noodles in broth with meat, potatoes, parsley, and salt. They make three kinds: chicken, ham, and sausage. All super tasty. We'll come back for some when the ring the bell.

Now this I know!
What's that?
Funnel cake*! 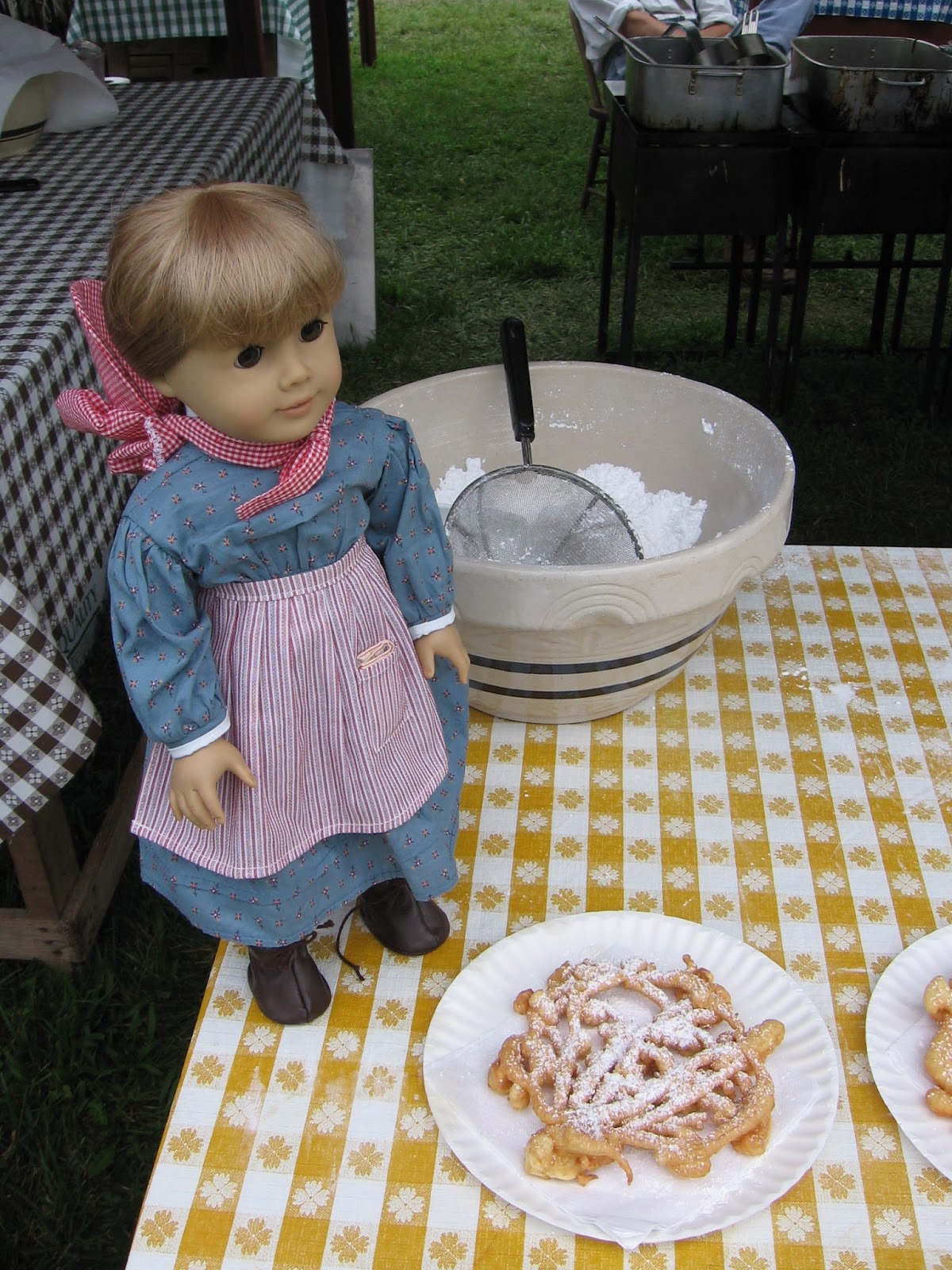 I think it's time we get back to our area.
Okay. There is so much to see.
I know and we haven't even touched the surface.

Come back again tomorrow to find out about our demonstration.

* Recipes in future posts; please be patient. There are many versions so finding the right one can take time.

Posted by Xyra Silverleaf at 12:24 PM