Welcome back to our Goschenhoppen experience. When we left off yesterday, we were just eating breakfast. A split fastnacht drizzled with molasses. [Note: To the PA German folk in the Goschenhoppen region fastnachts were not coated in sugar (powdered or granulated) or icing or chocolate and they were not filled. They were plain and drizzled with molasses, Syrup, or table syrup (not maple syrup).]

Picking up the story after breakfast...

What cute duckling! So Fluffy! 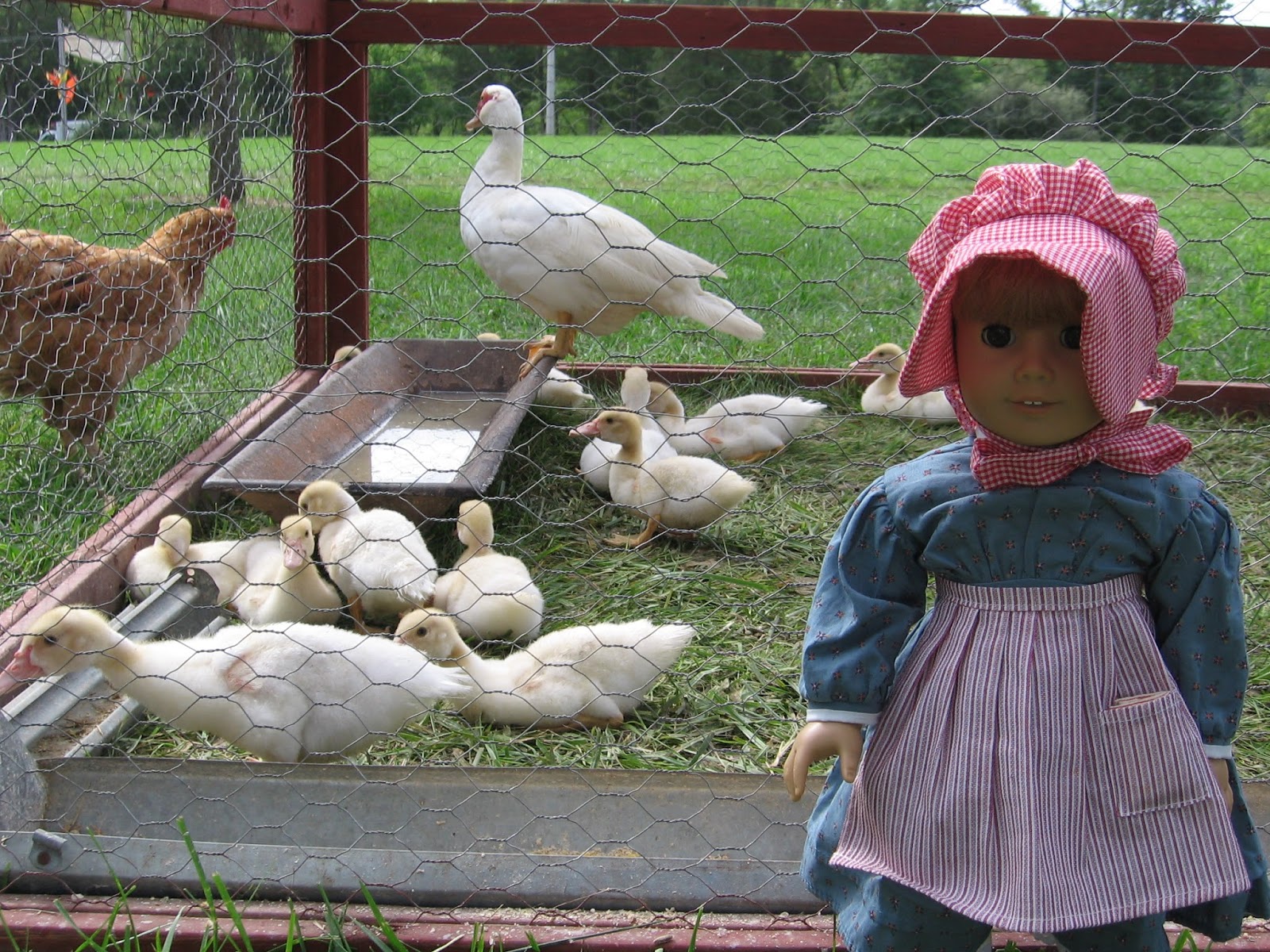 (laughing) And they peep instead of quack. 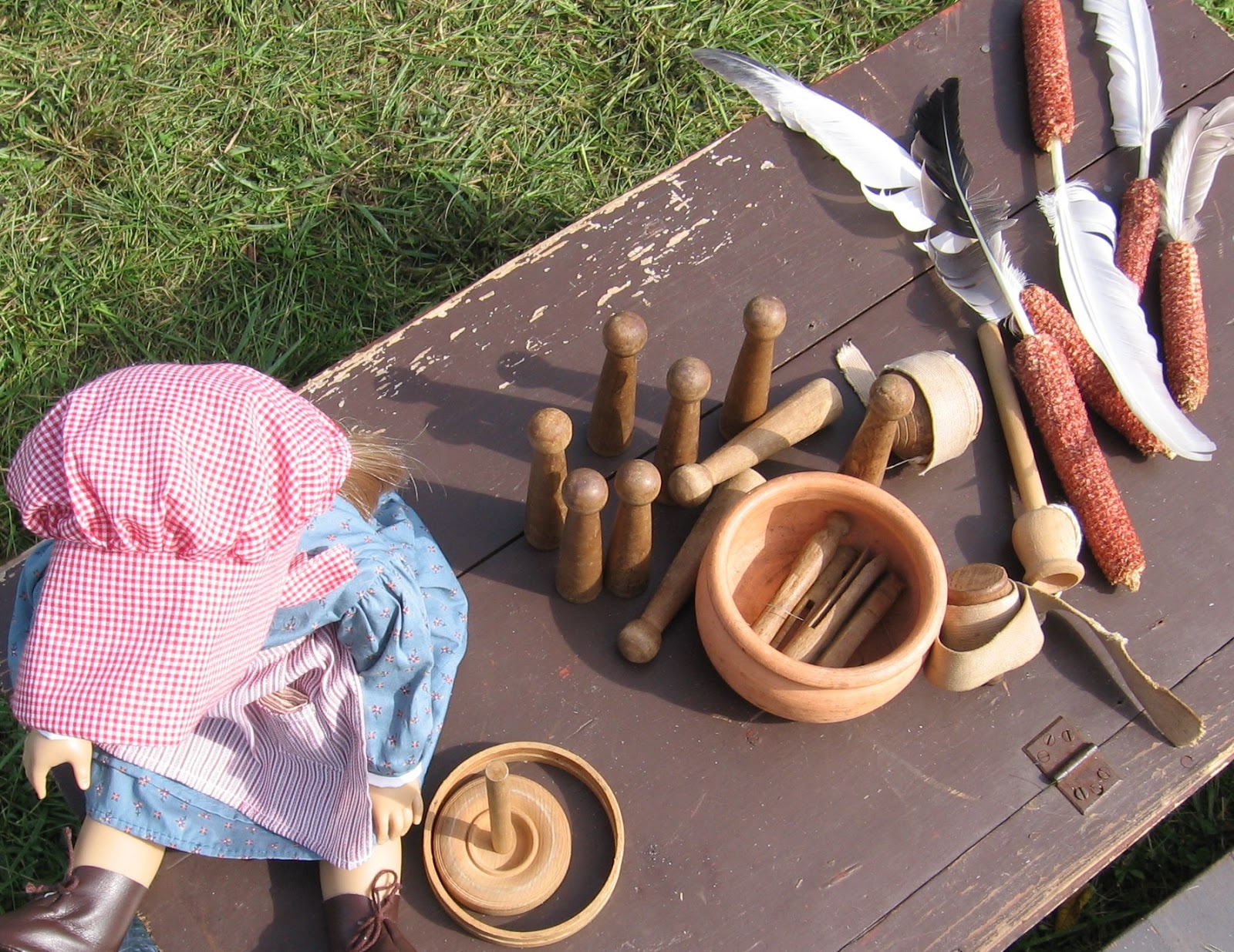 Yes. These are the toys and games kids would have played when their schoolwork and chores were finished. Let’s see…the one right next to you looks like a ring toss or maybe a version of quoits (pronounced kway-ts). Then clothespin drop, nine pin, tops, cup & ball, and cob toss.
Wait…what? How are these games played?
Well, quoits…it’s kind of like horsehoes. There is a pin at one end and the players stand a certain distance away and throw their circle toward the pin. Points are awarded by how close the ring gets to the pin.
What about nine pins?
Oh, that’s a fun one…it can be played on a table or on the ground…it’s an early form of bowling.
Neat! I like bowling. And you don’t have to explain the clothespin drop. That’s an easy one. Did you say those are tops?
Yes, you hold the top in your hand in a way that you still have a hold of the ribbon then you flick it out from you. The ribbon gives it more spin.
I understand the cup & ball, but what’s with the feathered corn cobs?
This is a popular toy. Once the corn is harvested and shelled for feed, the cobs are used for different things. If you stuck 1 or more feathers in one end and tossed it in the air, it spins on the way down. 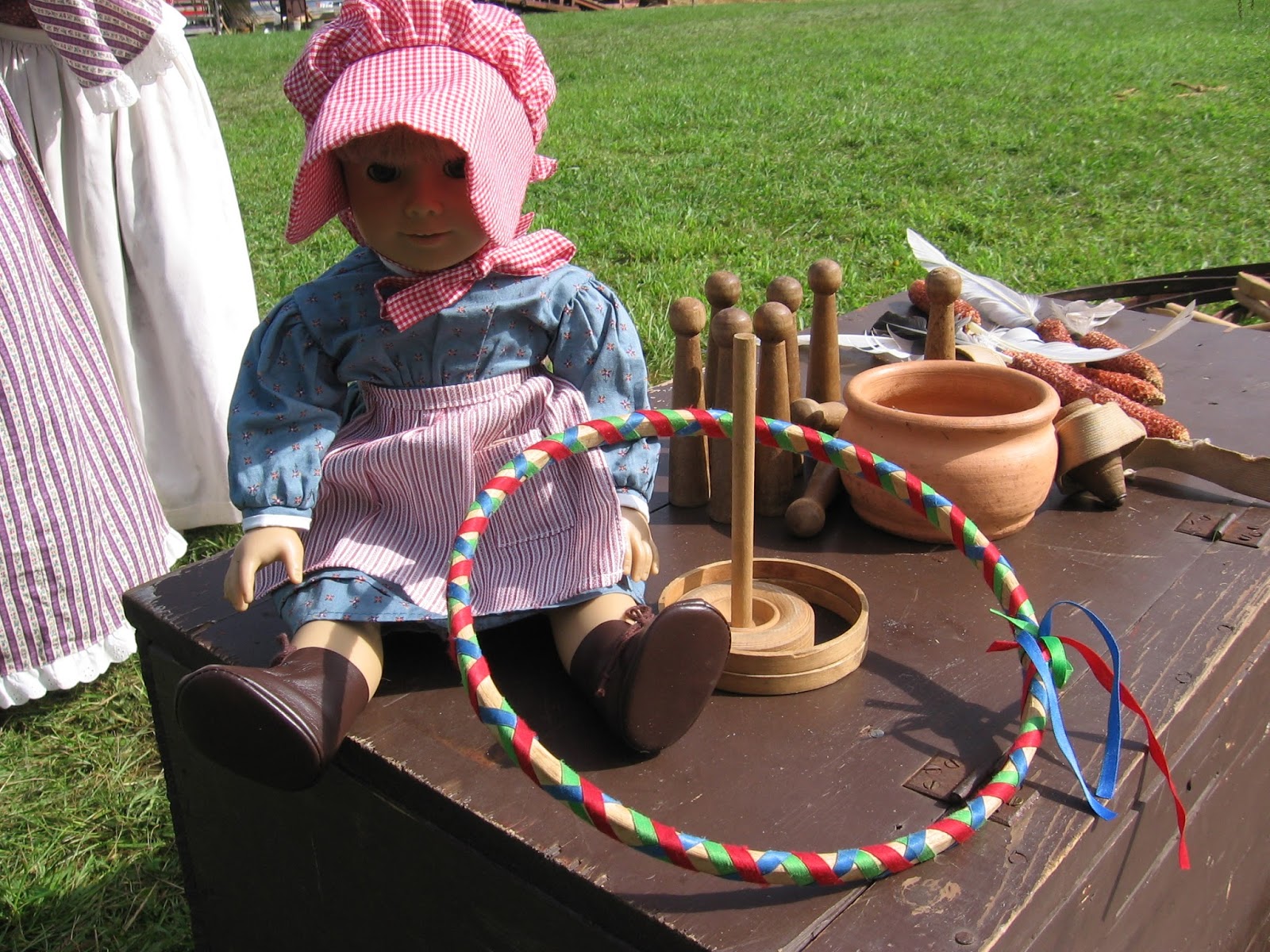 Cool! Now what’s this pretty hoop used for?
That’s a graces hoop. It’s a two (or more) person game…one girls were encouraged to play and boys not so much. Each player would get two, pointed sticks they would use the sticks to toss the hoop in the air to each other and to catch it. This looks like a big hoop.
What other toys are there?
Follow me!

Let’s make a Corn Husk Doll
A what? 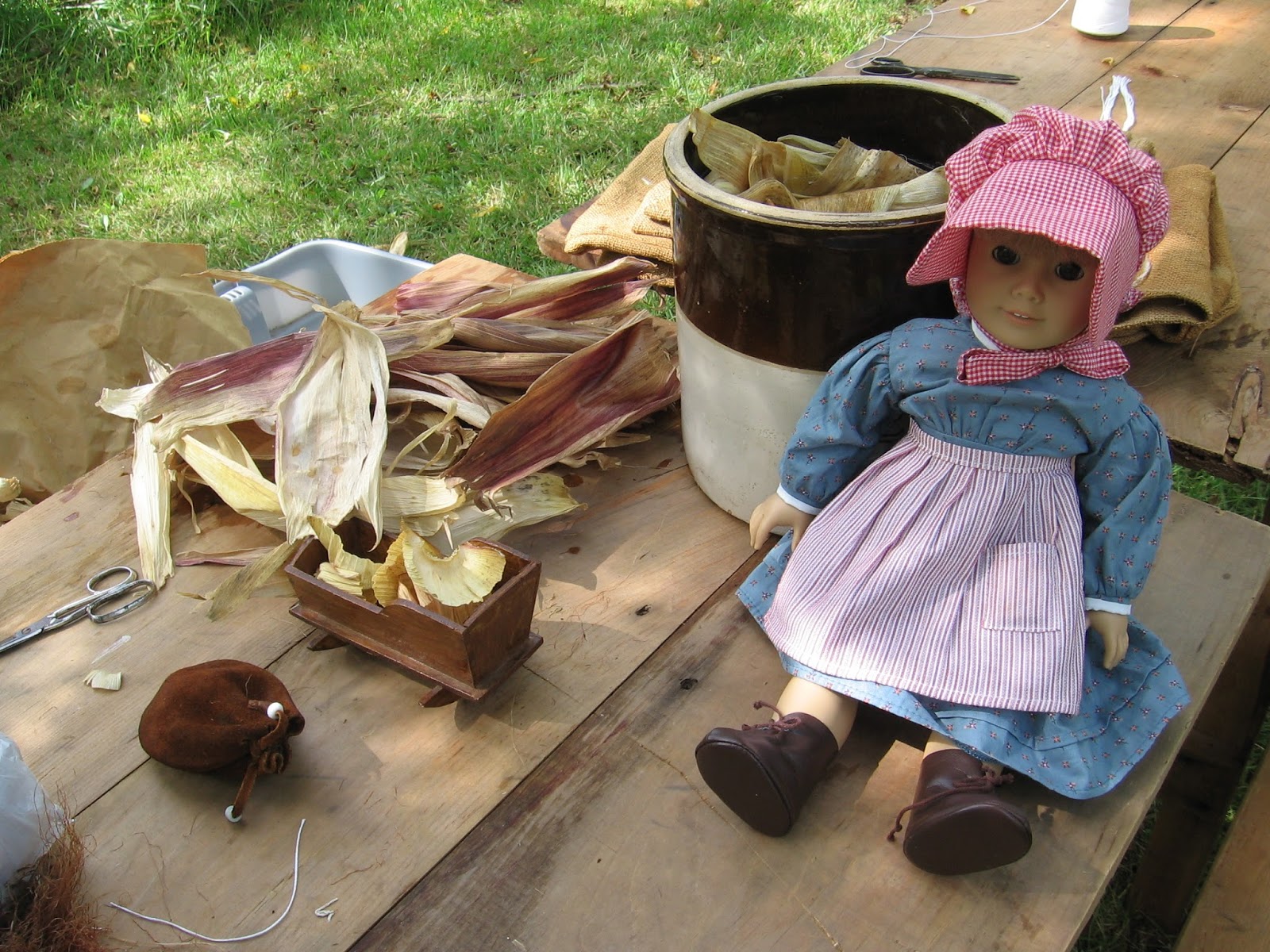 A corn husk doll. After the corn was shucked the husks and silk remained. Some was collected to make dolls. You soak the husks so they are pliable. Take a handful of silk and put it in the center of 6 husk leaves. Tie the end tightly with string. Hold the tied end in your hand and gently peel the leaves down. Tie the leaves about 1 inch below the hair. You know have head and body. Take another husk and flatten it, then roll it into a cylinder. Tie at both ends. Place horizontally under leaves just under the neck. Then tie a piece of string around the waist. Voila! A doll. 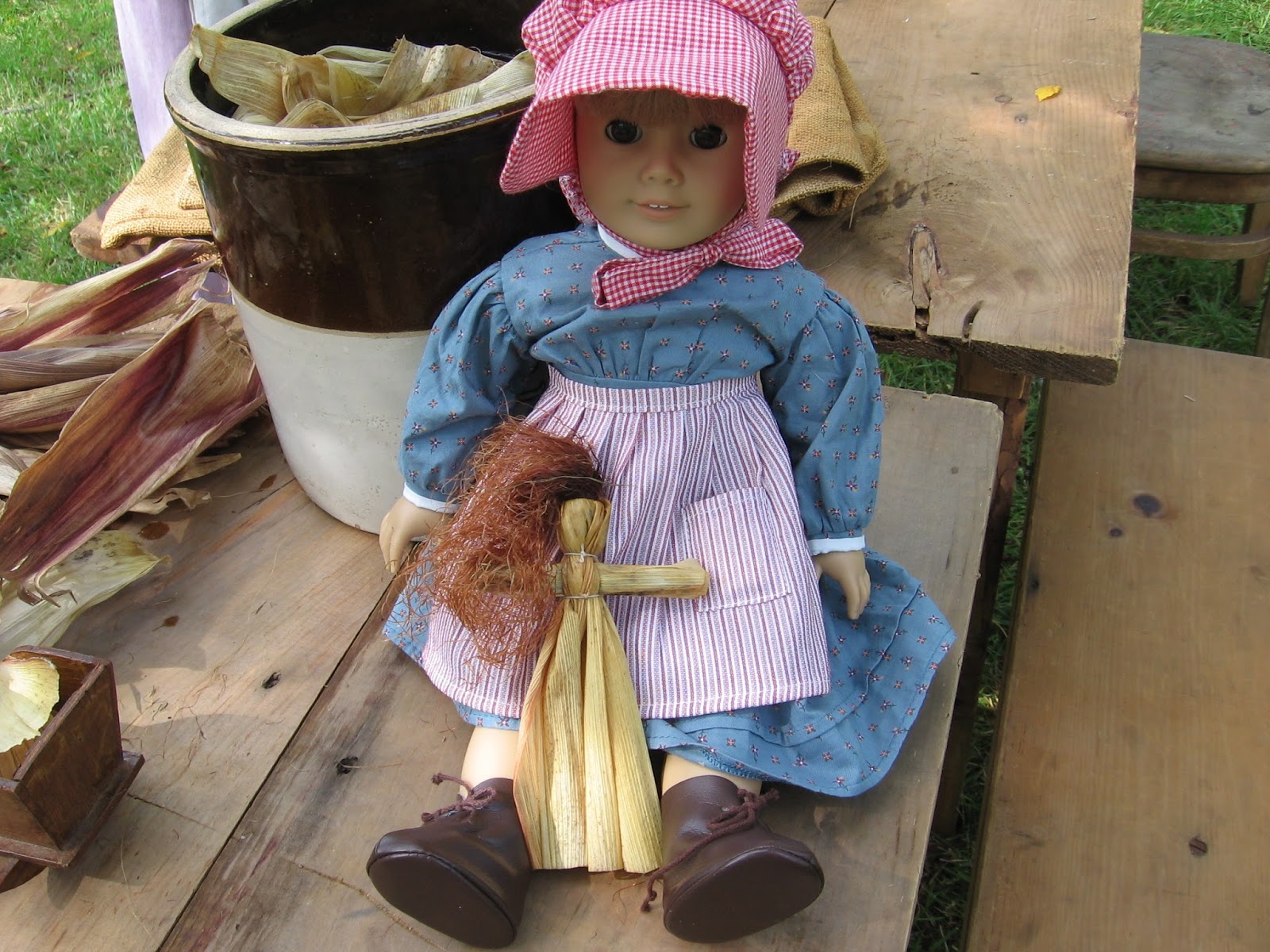 Where did they learn about these?
Their Native American neighbors.
Was that the only kind of doll? What happens when it isn't corn season?

Ah…the Tow Doll.
A what?
A tow doll. Girls would gather scraps of fabric and sew the sides together. Then they’d stuff the doll with this stuff…tow… 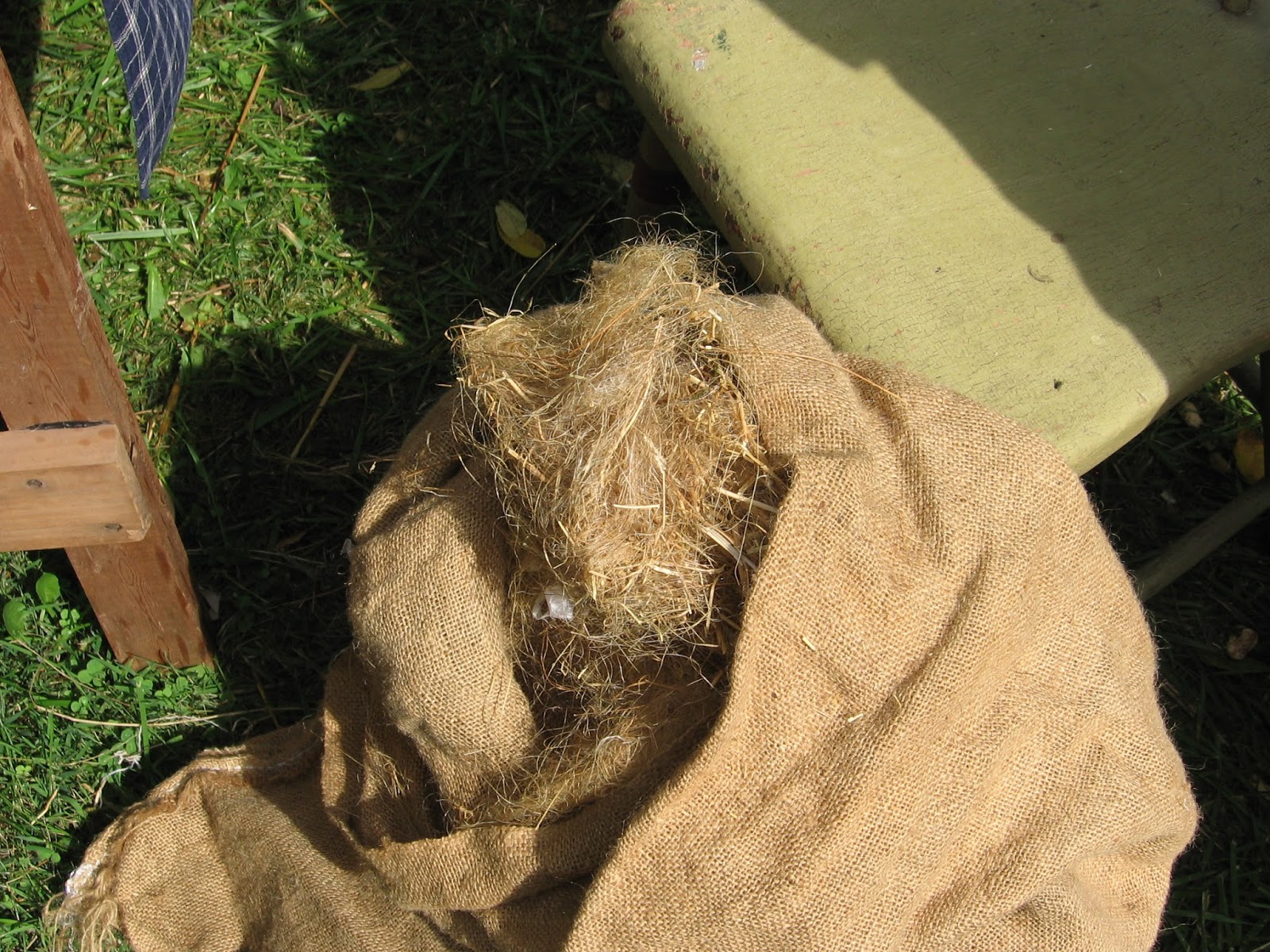 and finish sewing it shut and tie on arms. Yours looks nice. 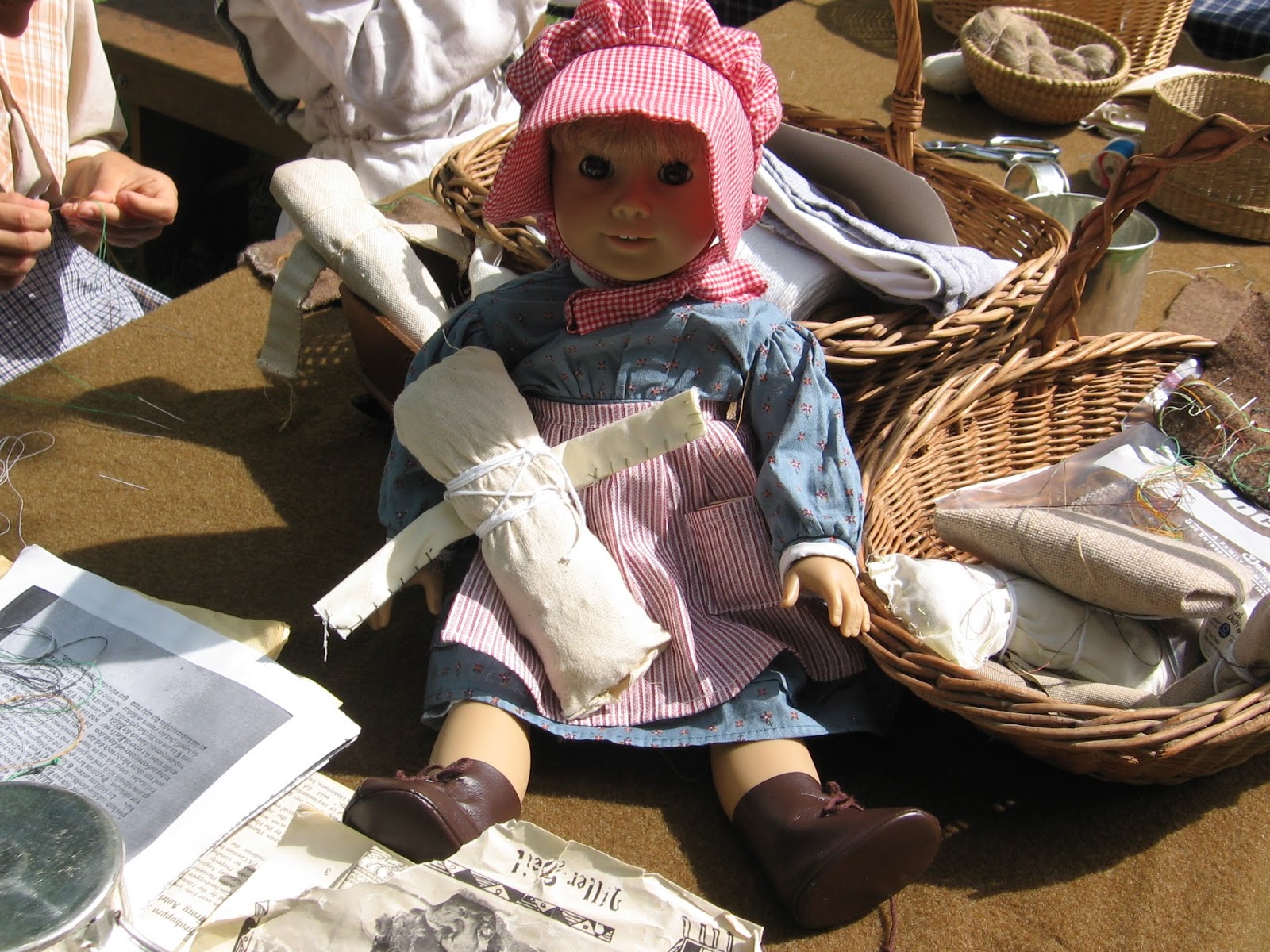 Thank you. But wasn’t there anything else.
Sorry. No Pleasant Company or American Girl in those days. These are the first American dolls.

Tune in again tomorrow for another installment from the Goschenhoppen Folk Festival.