This is what happens when you're rushing out of the house. :-D

Some teas are packaged as sachets or bags only without the helpful tag or being individually wrapped. Trader Joe’s Irish Breakfast comes in a big box this way. Celestial Seasonings does too. Well, I found a tin with unmarked tea bags in it and thought it smelled good so threw one in my cup, filled it with hot water, slapped the lid on, and headed out the door.

Turns out it was Celestial Seasonings Sugar Plum tea. [A rich herbal blend with the festive flavors of ripe purple plums and spices.] It’s a great tea and does not curdle the milk as some fruit teas do; however, it is not one you want to over steep. [Brewing instructions: Pour freshly boiled water over one tea bag. Steep 3 to 5 minutes and remove tea bag. If desired, add milk and sweetener to taste.] It gets very strong and very bitter. So first lesson of the day…if you remove tea from a box to another storage container, be sure to mark the new container. 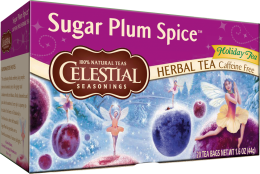 On the upside, sharing this mistake with you helped me find another great tea site!

Yesterday I found a fabulous blog while looking for some neat tea information to share about my favorite blend.

So what is my favorite blend?
Earl Grey. 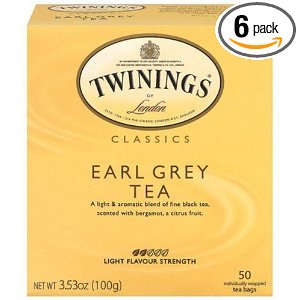 What is Earl Grey?
Earl Grey is a blend of Indian and black teas infused with oil of bergamot. Bergamot is a small acidic orange. [http://en.wikipedia.org/wiki/Bergamot_orange]

Why is it called Earl Grey? Let’s start with who is Earl Grey?
Earl is a title in the Peerage of the . In 1806 General Charles Grey became Earl Grey as a reward for his successes in battle against the American colonists at the Battle of Germantown. ( is very close to where I live in .) I won’t go into that, though.  If you want to check out more about the battle here are two links; an American version and a British version. J http://www.ushistory.org/march/phila/germantown.htm http://www.britishbattles.com/germantown.htm

Which Earl Grey is THE Earl Grey tea named after?
Earl Grey tea was named after the second earl (also named Charles). He was Prime Minister to King William IV. You can also find his name attached to a  village, a lodge in and a tea salon. (I'm certain there are more places too.)

How did the tea get the name?
Legend has it that the Earl was given a gift of bergamot tea from a Chinese mandarin or an Indian raja with whom he was friends in gratitude for Grey’s role in saving the friend's (or friend's son's) life. Supposedly, when he started running low he commissioned a local tea maker to reproduce the recipe.

My thought is that it became known in the shop as “Earl Grey’s tea” among the workers, so the name stuck. You know, the Earl’s house keeper or butler or other servant would be running errands and stop to pick up “Earl Grey’s Tea” from the shop and the clerk would find the tin marked EG, etc.

The flavor is distinct and full. Some do not like it. I have to admit one of the reasons I even tried it was because of Star Trek: the Next Generation’s Captain Picard. It was his favorite beverage. Check him out here: http://www.youtube.com/watch?v=R2IJdfxWtPM

That's all for today. This is a long one. I hope you enjoyed it. We'll go back to the wardrobe tomorrow. How are your designs coming?
Posted by Xyra Silverleaf at 1:18 PM