The Pets Get in on the Fun

In this installment of Wednesday Wonders we chose another book to represent; however, not a cover, but a scene from the story.

In The Cat Who Could Read Backwards Lilian Jackson Braun introduces us to a reporter who is trying to get back on his feet.

Qwill is assigned to the features department. Specifically the art beat.

He is paired with a fussy critic who has a stunning Siamese cat named Kao K'o Kung who reads the the newspaper headlines from right to left.
Backwards.

There are 29 installments in this cozy mystery series.

Koko and Yum Yum are the best.

The last few aren't quite as good as the first 20, but since she was in her 90s when those were published we don't mind too much.

Anyway, here is Rascal as Kao K'o Kung reading the headline from right to left. 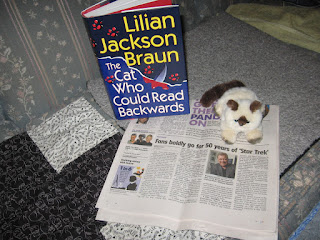 
Do you have an author whose books you pick up on or close to release date? If yes, who is it?

Posted by Xyra Silverleaf at 11:21 AM