Back in January Flo announced Say Hello to My Little Friends' new book group feature. The first book assigned, Lanie by Jane Kurtz. Last week I got the rest of the crew on board to read this book! (giggles) Hey, the main character and I share a name; she has to be cool. (laughs)

What are you all up to? 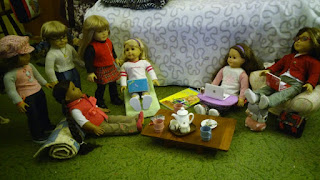 Writing our reports for Lanie.
You're doing Lanie's homework?
No! (laughs) For the book group.
Oh! (laughs) That makes more sense.
Yeah. We're doing two. One like what we usually write up and then an abbreviated version to add to the discussion on February 15.
Move over. We'll do ours too. 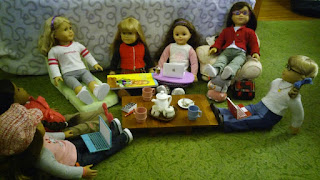 Lanie
A neat read. It's not often I find a character with my name, so I had to give this a chance. We are definintely different people. The things we do have in common include a love of gardening and an adorable pet house bunny. Book Lanie draws much better than I do and likes writing observations in her science journal. I have a lot more sisters than she does. Anyway, I really liked this book and following the caterpillar's metamorphosis. I hear there is a second book; I'll have to find that one too.

Haley
Our Lanie suggested this book; the main character shares her name. I'd probably be excited to read a book with a character named Haley in it. I have an unusual spelling. The author tells a tale through the middle sister's point of view. The story flows nicely and has some ups and downs. I was the youngest for a while, but I guess am now in the middle. It's not that bad, but in the book Lanie seems so much different than the rest of her family; like she doesn't get much support in her ideas. But you know she really does. Fun read.

Grace
The book seems to be just as much about Emily, Lanie's litte sister, as it is about Lanie. The author focuses on their relationship. Emily is in first grade and wants to be like her 9-year old sister Lanie. Many times when she "helps" the results can be not so good. The author does a good job at showing the frustration and the forgiveness between the sisters. Big sister, Angela, has to step in to help Lanie see the way. Not bad. I might read it again.

Kaya
I'm starting to see a pattern in the American Girl books. Plot points including someone being away in a foreign country; having someone doing something cool while another is going about a normal routine; feeling left out; envy; not dealing with the envy in a productive way; having to apologize for something; smoothing out hurt feelings. Not an entirely bad thing, but here I started to get some flashes of Jess's and Lea's stories with the animals; and then Grace's too. It was good, but I don't need to read it again.

Kirsten
Lanie's story is interesting on many levels. First you have the scientific field study of the caterpillar and the first graders. Lanie has interesting journal entries with illustrations. Then, with Aunt Hannah's help, she branches out to include a study of birds and local plants and vegetables. Pretty cool. It was hard for Lanie to take over when her aunt left, but she...oh, that's a spoiler. Liked this story, especially the illustrations.

Lea
Lanie chose this story because the main character shares her name, but the three sisters - Angela, Lanie, and Emily - spell out LEA. Really though, this story offers an interesting look at being a sister. Sometimes it's not pretty, but things can work out. I think some of the arguments were worked out too easily, but what can you do with 108 pages. I was inspired to look up information on caterpillars and milkweed.

Melody
If you have siblings and have experienced sibling rivalry first hand, this book might be annoying as the conflicts are resolved quickly like they are on TV. Otherwise, it's pretty good. It would have been nice for Lanie to have a movie, but maybe they couldn't find a rabbit trained to walk on lead. Seems like a really great family. They even came up with a way for the youngest to try foods she would usually refuse. Pretty interesting idea too. A nice, easy read.

Lanie by Jane Kurtz
My rating: 4 of 5 stars
This is book one for American Girl of the Year 2010 Lanie Holland.

A fun and interesting read. The story in this book wraps up in the end and can stand alone if you can't find the second book.

Lanie is a 9-year old fourth grader and the middle sister. She gets to help in her little sister's first grade classroom. Her older sister is in high school. She loves science and being outside with her house rabbit, Lulu. The rest of her family prefers indoor activities. News comes that Aunt Hannah will be staying with the family for a few months. Her arrival is joyous as she is a scientist and loves the outdoors too. Lanie can only email the good news to her best friend who is currently in Indonesia with her family studying orangutans.

The story is nicely crafted with highs and lows and a range of events and emotions. Everything seems to hover on the surface (not a lot of depth), but the target reader is around 7- to 10-years old. The messages are plain but not so obvious you feel like they are being shoved in your face.

If you have read a lot of the American Girl books, you may have noticed the stories are formulaic. The historical characters had a certain order of events to create a 6 book look at their lives. The Girl of the Year books are similar. Early on the Girl of the Year story was told in one book; over time the story expanded to three. I've come to the conclusion that American Girl provides the author with an outline and the author creates and fills in the details. The authors do a wonderful job and provide fascinating details; the only drawback, the challenges and results get predictable.

One thing I really enjoy about this book (and the older American Girl books) is the use of illustrations. Here the reader gets to see snippets of the sketches Lanie puts in her scientific journal chronicling the progress of caterpillars to butterflies. In addition, we get a few other illustrations giving the reader a peek at Lanie's family and activities. There are not so many to make this be a picture book. No, it is a chapter book with supporting illustrations. The illustrations are drawn nicely - not too vibrant, nor too dull.

Posted by Xyra Silverleaf at 2:43 PM