Julie Albright's Best Friend Gets her Own Book

Ever since Julie's release we have loved her (she has a lot in common with Melody and Xyra) and her best friend, Ivy. We have Julie's books on our "to read" list, but haven't gotten to them yet. We did get Ivy's book, Good Luck, Ivy on a visit to Harleysville Books, LLC back in January. Well, Melody picked it out.
We're here to tell you about the book and share our thoughts. 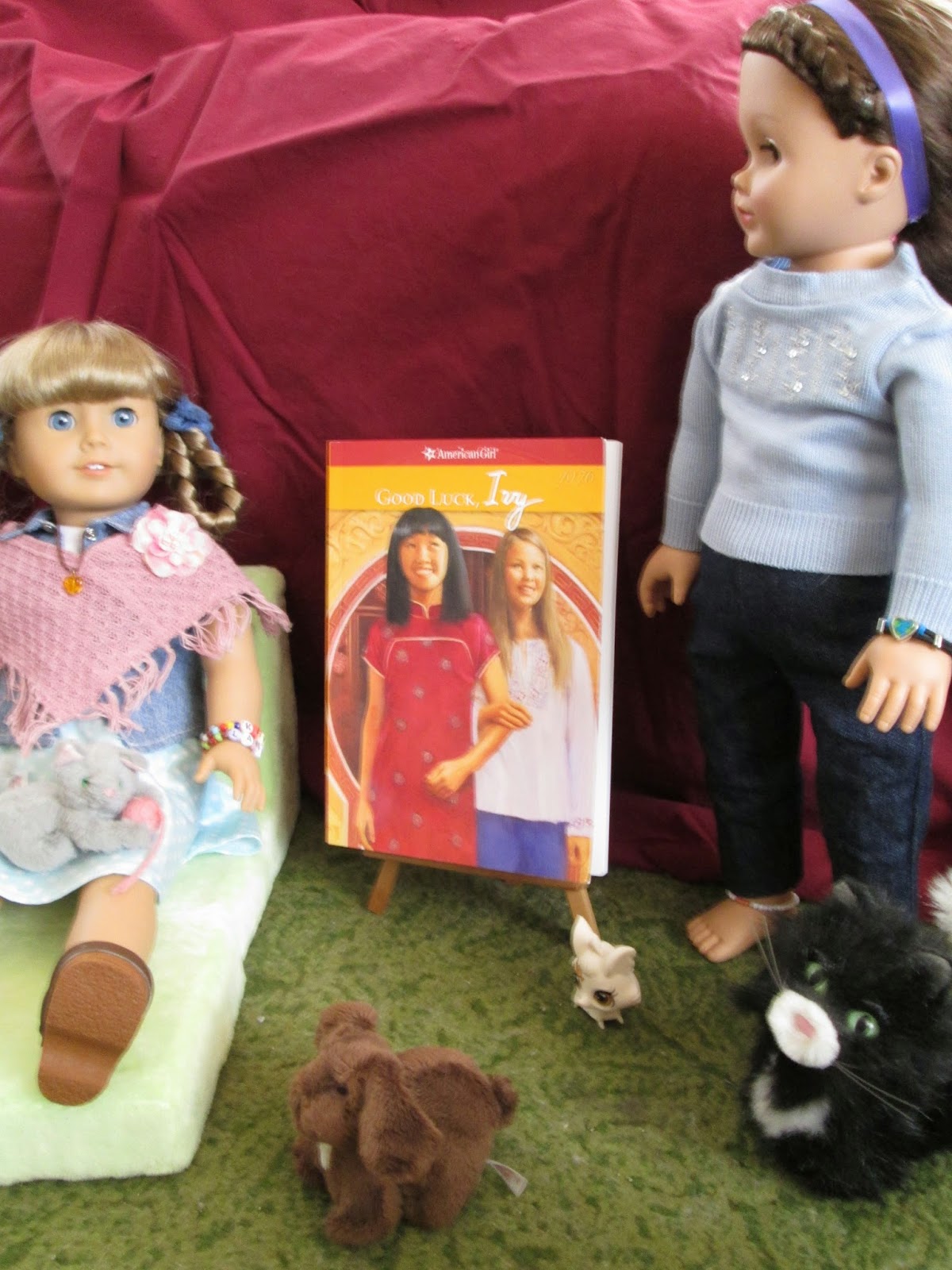 This is book seven in the Julie series. Julie's color is golden yellow. Hey, it's the same color as our Tupperware canisters. Gamma Enne says they are from the 1970s.
Back to the book.
Okay. So the cover is bright and eye catching. Ivy, in her New Year's dress, and Julie are on the front.
Inside each chapter has a golden yellow title and illustrations are sprinkled throughout the story. 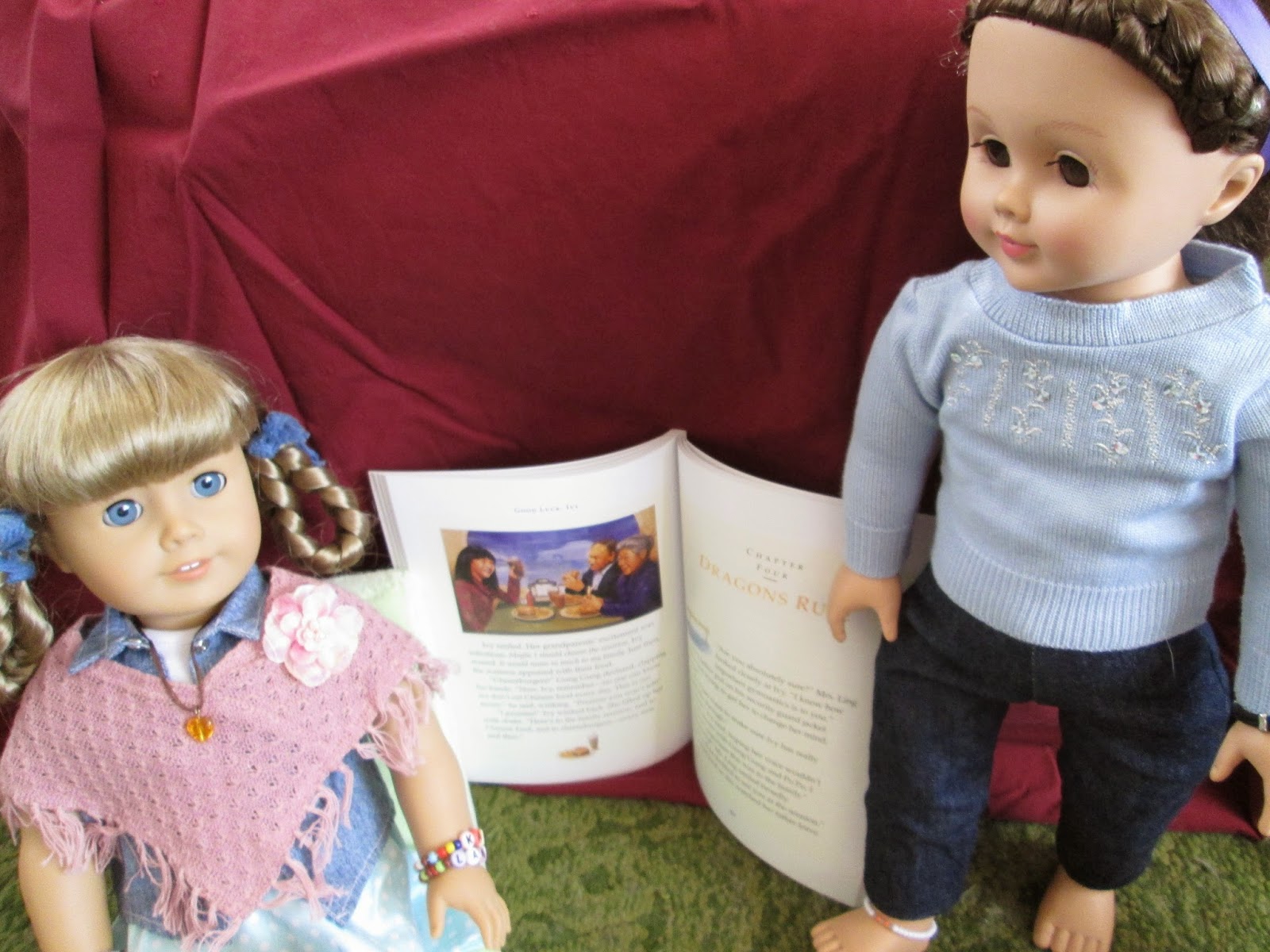 Not so many that it becomes a picture book, but enough to add to the story.
This one shows Ivy having fun with her grandparents.
Now on with the reviews!

An interesting read. I liked learning about Ivy's heritage and family traditions. Love that red is a lucky color. I didn't realize that some cultures have schools for kids to go to learn about their cultural background.

Getting back on your "horse" can be really difficult especially when you have to do it in front of a big crowd. Ivy is really brave and her brother is awesome for helping. So's her little sister.

A lot happens in this book, but I wish more detail had been given on some scenes. The illustrations did help a bit; I still wanted more.

Ivy is cool. I kind of wish the roles were reversed...Julie been the best friend and Ivy the main character of the series. There is so much we could learn about Chinese Americans.

Except for my bangs, Julie and I could be twins. But that's not what we are talking about. Good Luck, Ivy is a nice read. Ivy struggles with a lot of different issues and emotions and learns how to deal with everything going on in her life. Sometimes it seems a little too easy, but I think we make things more difficult by over thinking them.

This is a great story about a girl who has to make a few big decisions. It's funny that the one tiny detail that bugs me the most about this story is the gymnast the author chose to name. She chose Olga Korbut and not Nadia Comăneci. She even mentions the Munich Olympics not Montreal. To resolve this I must believe that the homework Ivy is doing is in the spring semester and thus before the 1976 Summer Olympics. Because if this is the fall, it is highly suspect not to mention the first perfect 10 given in women's gymnastics...but I digress. :-)

There were quite a few spots in the story that brought tears to my eyes. Ivy fights humiliation, fear, frustration, and disappointment to reach her goals. She is blessed with a loving family and supportive friends. I really enjoyed this story and am glad the author could write from experience, with true perspective on Ivy and her family's heritage.

The downside is the little bit of history in the back of the book. "Looking Back: Chinese Americans" while accurate is heavily diluted. It mentions how many came to California seeking fortunes and planning to return to China, "but most of them never made it back. They ended up settling in..." Yes, many chose to stay; however, many more didn't make it back because they died or were killed while in service to the railroads and mines. Sugar coating history is not a good thing. The west during the gold rush and after was brutal. Glossing over the perils of the past dishonors the memory of those that experienced it.

But to reiterate, I really enjoyed Ivy's story. It was a fun, emotional, and easy read.

[Note: I have since learned that Julie's story starts in 1974 and continues for a year (or so), therefore Ivy's story takes place in either spring of 1974 or 1975 which would make it acceptable to focus on Olga and not Nadia. What throws me off is Julie's bicentennial quarter...they were only minted in 1975 and 1976 (even though they are still in circulation today) Julie would not have been able to have one in 1974.]

Posted by Xyra Silverleaf at 8:26 PM