If you have read Melody's Google+ bio found in the About Me section of the right hand sidebar, you'll know we are super Harry Potter fans. Seen the movies several times, read the books more than several times (the books are better), and was a beta member of Pottermore (originally sorted into Ravenclaw, but was resorted into Hufflepuff with the new incarnation of Pottermore). Anyway, we recently re-read the entire series and found that each had their own favorite book! How cool! So we have a series review.

[Many of the pups decided to join us outside. It was National Dog Day, but they don't need a special day to have fun.] 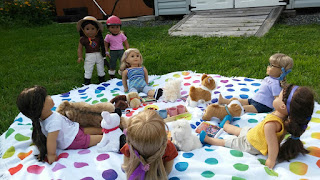 We've decided to review the Harry Potter series.
You're just in time too.
Your books are waiting. 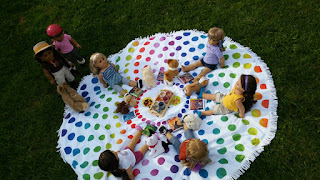 Have some tea too.
What kind? 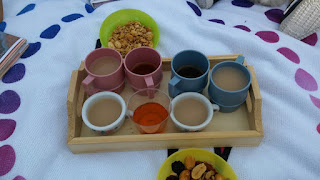 Victorian Afternoon from the new tea place in town.
You mean Diehl's Real Teas?
Yes, that's the one.
[Kaya and Lea take off their hats, join the circle, and sip some tea.]
Wow! Smokey! What is it?
Indian, Sri Lankan, and Formosan teas.
Cool! Pass one with sugar and milk please.
You got it.
Very tasty.
Yeah, and Xyra said this is the re-steep of her original leaves.
Holds its flavor nicely.
Good cold too.
Nice! 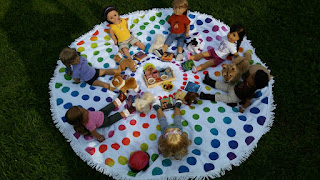 Okay, let's get started with the review! Haley you're up.

Harry Potter and the Sorcerer's Stone 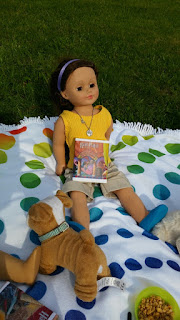 Let me start by saying I love the entire series. This first one is my favorite. It's light and innocent and filled with wonder. We get to meet Harry and see that he has a good heart despite 11 years of not the best treatment from his family. While he learns about who he is, we learn right along with him. He's mischievous, inquisitive, loyal, kind of lazy, a bit stubborn and a great athlete. He also meets challenges and works toward a good result.
[polite applause from the circle]
Thank you, Haley. Kirsten...

Harry Potter and the Chamber of Secrets 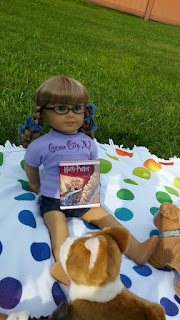 Let's get rid of some goofiness. We all love this series. No need to repeat that each time. But our favorite of the series is the one we're reviewing. Book one gave us a foundation; book two built on what we learned in book one. Unfortunately the parts I really like in this book never made it to the screen. Sir Nicholas's Death Day Party, Peeves' taunts, you know what I mean. Here is a real mystery and Harry, Hermione, and Ron go about solving it. Hermione's research is outstanding. Gilderoy Lockhart is just so over the top and we get to see fan girling from Mrs. Weasley, Hermione, and even Ginny. My favorite line is from Sir Nicholas, "Half an inch of skin and sinew holding my head on, Harry! Most people would think that's good and beheaded, but oh no, it's not good enough for Sir Poperly-Decapitated-Podmore." Another favorite, "Because that's what Hermione does. When in doubt, go to the library." Oh, and this one that is Xyra's favorite, "What exactly is the function of a rubber duck?"
(laughing)
That is a good one.
My favorite, "Dobby is free!" (sniffs)
Um, yeah. Lea...

Harry Potter and the Prisoner of Azkaban 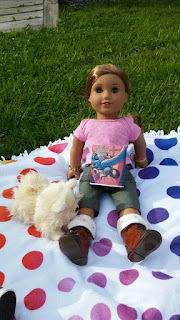 I LOVE this book! Harry finds real family! And you know what? Voldemort appears in name only. This time the ministry is looking for Sirius Black and the bad things that happen to Harry are because of the dementors sent to guard the school. Plus, we get to learn about hippogriffs! Buckbeak ROCKS! Crooshanks rocks too! Professor Lupin is the beast, I mean, best. (giggles) Hermione takes on Malfoy-brilliant! It's a really good read and so much of this is left out of the movie; seriously really great details about James and his friends.
So true, so true. Lanie...

Harry Potter and the Goblet of Fire 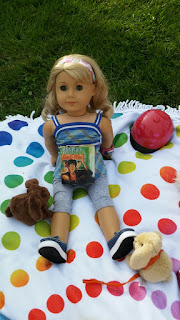 First the quidditch world cup then the wizarding olympics! How can you not like this book. Not to mention learning about other wizarding schools. Such intrigue. The Yule Ball is really cool. On the other hand, this is the book that starts to get deeper into the darkness of what is happening around and to Harry.  We can understand why Harry might not be a stellar student in class with all the distractions he deals with. Then there is Hermione and her attempt to free all house elves. Her heart is in the right place to want equality for all magical beings. We start to see glimpses of jealousy. Just so much going on!
You didn't mention Mad-Eye.
He was something else, eh?
Yep. Kaya.

Harry Potter and the Order of the Phoenix 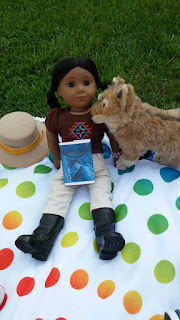 Okay. A lot of people really do not like this book in the series. Lady Webby is one of them. She almost didn't continue the series after. I can totally understand that. This book is a huge exposed nerve. Harry is cut off from everything he knows and wants to know. He tries to get information from the muggle news about the wizarding world, but doesn't delve deep enough to find what he's looking for. To top it off he and Dudley are attacked in Little Whinning and Harry is almost expelled again. Plus he's gone from golden boy to joke - not cool! He is so loyal to his wizarding family and wants to protect them at all cost. I wish he had done a few things differently, but then we wouldn't have the story we have. (sighs) We also see the loyalty of his true friends. Dumbledore's Army forever! Umbridge is a nasty piece of work! Honestly, if you have only seen the movie; you really must read the book; so much is left out or changed.
"I must not tell lies." (shakes head)
Ahem. (pauses, stares from the others) Oh, sorry! I totally did not mean that to be an umbridge-ism. Sorry!
(chuckling)
Grace...

Harry Potter and the Half-Blood Prince 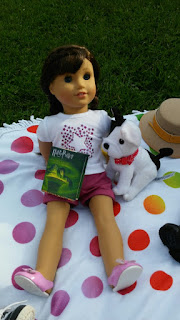 Like Kaya, my favorite is not always at the top of readers' lists. However, if you look at the entire series as a treasure map, this one holds the keys and if only Harry's mind worked like Hermione's the Deathly Hallows would be shorter. (smiles; murmurs of agreement). I'm so totally not a fan of Voldemort, but the memories Dumbledore uncovers, collects, and shares with Harry are interesting. On the other had, we see some of the consequences of not Dumbledore not being more open with Harry about things and Hermione not doing in-depth research. Again, if they had the story would not be the same. My favorite scenes involve Felix and Roonil Wazlib.
(chuckling, murmurs of agreement)
Your turn, Mel.

Harry Potter and the Deathly Hallows 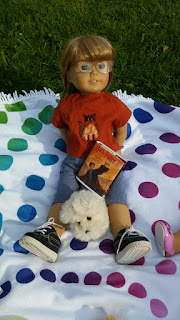 Yep. I'm the grand finale. I was talking with Martin about this over at The Savage Dolls. He's a Potterhead too. Yes, this is the end of the series. It made me cry a lot because so much happens and the fight comes to a head with Voldemort. Most of the series could be considered the boarding school genre, but this one is the true quest. I think as much as I cried I also cheered. Couldn't put this one down either! Had to find out what happened at each turning point.  You forget they are 17. So much weight on Harry's shoulders and when everything becomes clear...and Professor Snape...and Dobby...and Neville...even Draco, but more his mom Narcissa. So much changes. The fight for survival intensifies on all sides. Aberforth has a wicked wit and you know what, he was right there nearby through the entire story. I wonder how often he and Albus got together even if it wasn't always a calm gathering.

Usually at the end of a book review post, I give you my own review. However, that would be way too long. So instead I linked the above titles to my review of that book on goodreads. The girls did a nice job telling you why they liked the books without giving away any important information to spoil you. Believe it or not, if you've seen the movies, they don't spoil the books either. The movies give you the main plot and miss much of the substance of the story.

Is there a book or book series you enjoy so much you read it over and over? What is it? We'd love to know.

Posted by Xyra Silverleaf at 2:56 PM