Hi! I learned a lot from Lanie and her fall trip to Coolspring...so I am taking over for the rest of the week and getting my adventures posted in the same month as my trip. :-D

We got up early, but didn't rush. It was a nice day. Partly sunny...until we hit the Lehigh Tunnel and I-80 west. Then it was partly cloudy and rain started falling the closer we drove to Brookville and Coolspring.  It was so rainy I spent a lot of time in the truck. 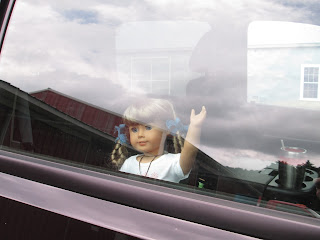 North and Out of the Truck

After breakfast on the second day we headed north to St. Mary's and the Bucksgahuda and Western Railroad! I was so excited I would get to see the B&W and hoped the rain would stop so I could explore. (Yes, it rained so much I spent the first two days of the trip reading in the truck. Although, I'd take reading over cleaning away cobwebs any day.) It took a little over an hour to get from Coolspring to St. Mary's. When we arrived, the sun was out! Yippee!

It was hot and humid and icky, but it was NOT raining. As soon as Xyra had visited a bit she came to get me. I burst from the truck... 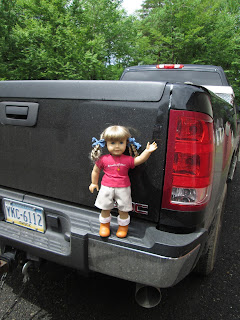 And headed for the sandbox. The earth mover was there just as Kaya said it would be. 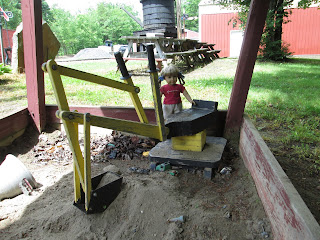 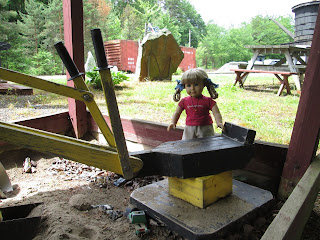 After sitting still for so long I didn't want to stay there, so I checked out the turntable. 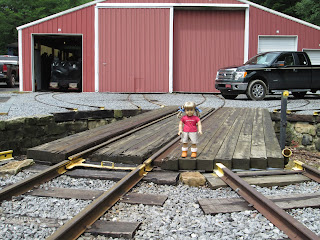 This helps the train crews turn the engines, getting them in and out of the engine house, and headed in the right direction on the tracks. 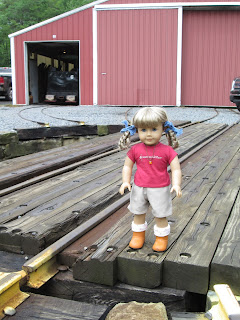 Then we started down the hill. The switches on this section of the track are a bit different than others I have seen. 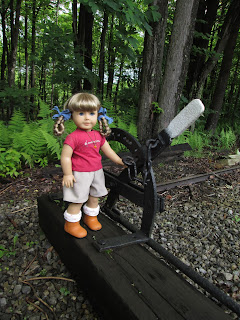 When the switch is thrown the points on the rail shift so the train can move on a different section of track. Do you see the points? 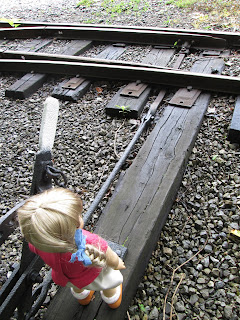 We hiked down the foot path and found a line of dump cars. They are tilted this way to keep rainwater from pooling inside and causing damage. 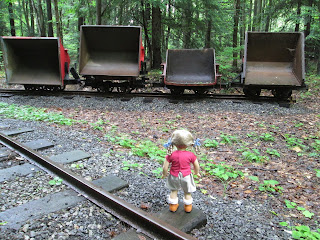 These rocks called to me to climb them. 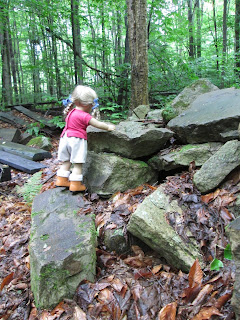 On top was a tiny snail. i could have stepped on it. 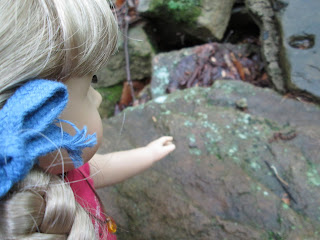 It's really blurry, but can you make out the little critter. 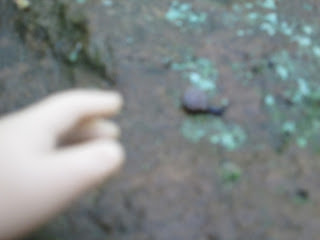 I didn't want to bother it so I got down and climbed a different section. 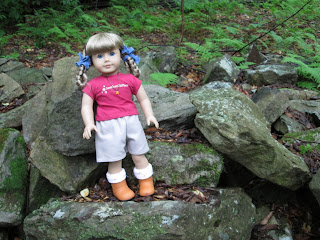 Soon we discovered the bridge. 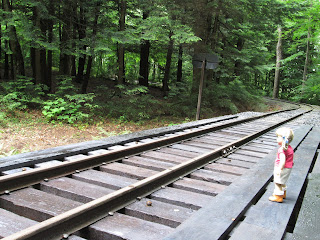 This was rebuilt recently. A lot of work went into it. 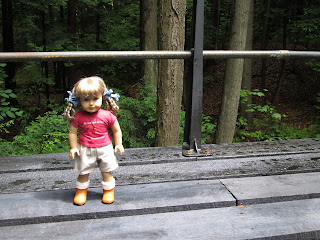 I checked it out from the bank too. 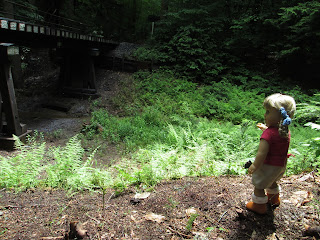 This railroad is surrounded with beautiful scenery and forest. We didn't see any big animals, but Xyra said her friends mentioned seeing bear and deer and even elk. 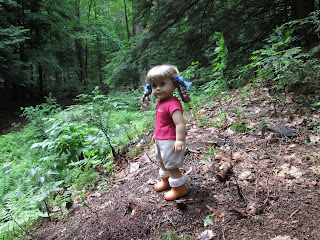 As we hiked along further we got to a spot on the hill where you could see the bridge. We were way over there just a few minutes ago. 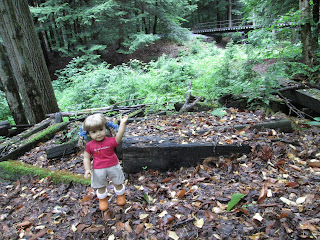 Back at the engine house I looked back to the opening of the foot path where we started our hike. 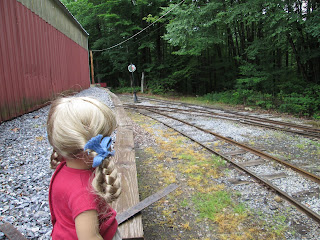 It was fun exploring the rails and stretching my legs! 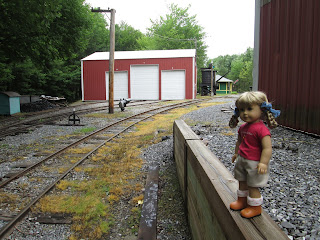 Back at Coolspring Power Museum

When we returned to Coolspring the sun was still out and I could explore there too. Especially the section where Xyra and Franz were working. It's called Sudlow Station. 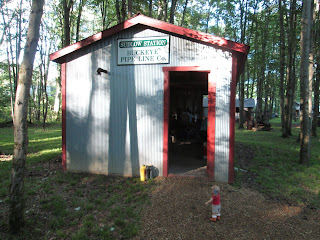 Today Xyra was cleaning the windows. I thought I'd help. 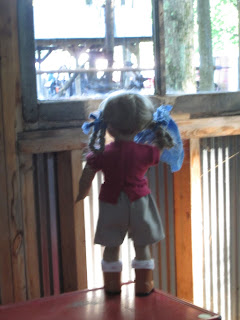 It was not a bad chore. I kept laughing at Xyra - she kept talking to the spiders. Especially outside. 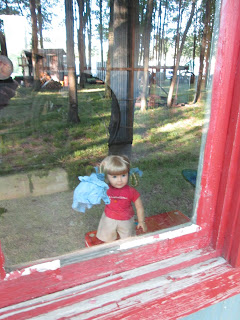 We found a tiny, fuzzy caterpillar on the door jam. 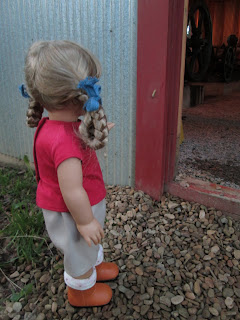 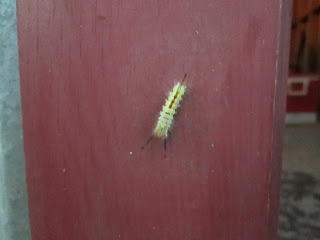 It was getting darker inside so Xyra turned on the lights. These are called gas lights. 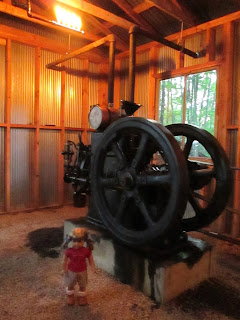 Gas flows through the pipes to where holes are drilled. When you light the gas you get these controlled flames. 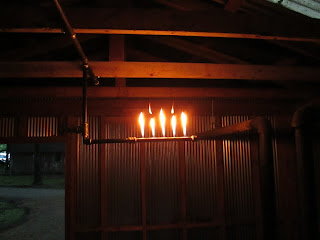 After washing the windows and doors it was time to rest. I think this is my new favorite chair. 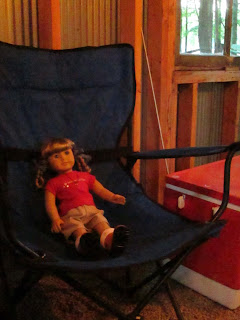 Whew! What a day? I had fun. Would you have enjoyed this day? Which photo or part was your favorite?

Posted by Xyra Silverleaf at 1:22 PM