You know, I think we've found a bunch of books that we can recreate in our Wednesday Wonders thread. They were gifts from a friend of Xyra's. Teacher Kathy moved earlier this year. She had extra books⏤you know, doubles⏤she said we could take what we wanted. This one looked interesting. It's called Marvin Redpost: A Flying birthday Cake? by Louis Sachar. 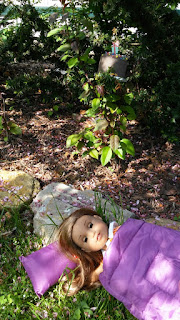 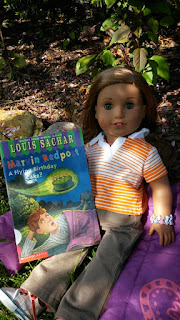 What do you think? I know I don't have a grey striped shirt like Marvin's and our cake isn't really green, but otherwise...not too bad, right?

Could you spot the cake? Maybe I should have put some green glow bracelets around it. Here's a close up of it "flying" through the bushes. (giggles) 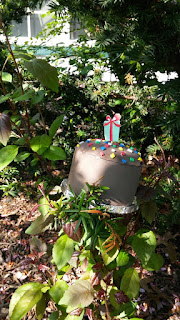 "Marvin Can't sleep. He's eaten too much cake. He's drunk too much punch. and the earth starts to shake. He hears a humming noise. And something zooms across the sky in a bright flash. it's green, like the frosting on Nick's birthday cake. Are candles making it glow? Is it a flying birthday cake...or something else?"

A Flying Birthday Cake by Louis Sachar
My rating: 4 of 5 stars
This was a fun read. Definitely geared toward third grade readers with a basic style and language.

The theme: a new kind in town who is out of place. The author takes on the feelings of a former new kid who was picked on until he made friends with a few people trying to help the new new kid. With a bit of science fiction thrown in the mix.

Joe Normal's status remains a mystery. He may be a bit more alien than just being the new kid in school. ;-)

I enjoyed this a lot and think the theme and moral were well encompassed. Subtle but not too subtle this author's message.

One of my favorite parts was when Joe visited Marvin's home and immediately figured out the fence symbol.

This is book 6 in the Marvin Redpost series, but it stands alone very well.

Are you familiar with Marvin Redpost? He seems like a great guy to me. If you have read this series, let us know what you think in a comment below.

Posted by Xyra Silverleaf at 1:57 PM